Several staff members are concerned that our invasive arterial monitoring kit (Hospira TRANSPAC IV), if flushed rapidly, can produce retrograde flow. An article by Murphy et al.,1 “Retrograde blood flow in the brachial and axillary arteries during routine radial arterial catheter flushing” is relevant. I have looked at other similar sets with inline syringes. Any comments on Hospira or other products? Thank you.

I appreciate your question to APSF regarding retrograde flow. If I understood correctly, are you asking whether syringe-type arterial line flush systems, as opposed to pressurized valve mechanisms, might cause retrograde emboli when injected too forcefully? The risk in pressurized valve systems depends upon the pressure in the infusion bag relative to the patient’s arterial blood pressure, and the duration of the flush, I suppose, as well as the amount of distal resistance to forward flow. I would not think it unique to any vendor, but your cited article describes the relative risks when using the syringe-type flush mechanism. Retrograde flow is the reason why in-line air bubbles or clot are potentially dangerous, since they might flow retrograde to the aortic arch and then anterograde into the cerebral circulation with a risk of stroke. I will forward your question to Hospira for comment on your specific system.

Thank you for responding to my question. Some staff members feel that the kit’s syringe design and the needleless ports, to some extent, are very prone to air entrapment. More importantly, the inline syringe (size 10+ ml) allows flushing (clearing the tubing following withdrawal of blood from the needleless port) at a rate which could result in retrograde flow. While the inline system insures sterility, does it increase the possibility of catastrophe? I appreciate your time and input.

Thank you for your question about SAFESET, Hospira’s closed needle-less blood sampling system. As you noted in your letter, SAFESET can help protect against exposure to blood-borne pathogens and IV line contamination. It also reduces blood waste. It is important to be diligent when priming the SAFESET as it is with any pressure monitoring kit. We try to train clinicians on the most effective means for priming kits with SAFESET. Some key points:

If used according to the Instructions for Use included with the product, there should be minimal risk of retrograde flow in the patient’s arterial system with a Transpac IV kit with SAFESET, and the Anesthesiology journal article you referenced would tend to support that belief. The conclusions section of the article states that manual flushing of radial arterial catheters at rates faster than 1 mL/s produces retrograde flow in the proximal axillary artery. It further states in the body of the article that retrograde flow was noted in none of the patients when the 10 mL flush volume used in the study was infused over a period of 9 seconds or greater. Our instructions for use state in section VI to “turn the one-way stopcock integral to the in-line reservoir on and return the fluid contained in the SAFESET in-line reservoir to the patient by pressing the plunger down slowly. Return the reservoir volume to the patient at a rate of 1 cc per second (10 seconds for 10 mL), until the plunger reaches its locked position.”

If the Instructions for Use are not followed, of course the risk of retrograde flow would be increased. I would remind the individual who raised this concern that at the end of the referenced article this statement appears: “However, adverse clinical outcomes related to radial arterial catheter flushing are rare, and our previous investigation was unable to document the passage of microbubbles into the central circulation during the flushing process.”2

Finally, I researched our company’s complaint database going back 5 years and found no complaints related to your concern of retrograde emboli when aspirating or re-infusing rapidly. 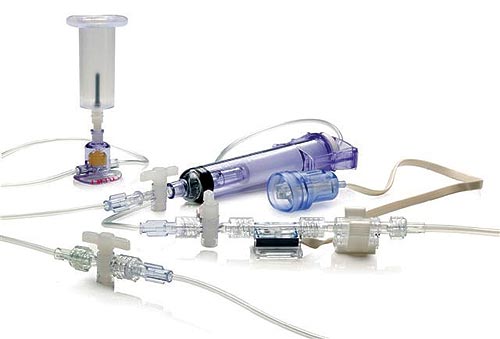