On September 12, 2012, the APSF sponsored a multidisciplinary conference, Perioperative Visual Loss: Who is at risk, What should we tell patients preoperatively, and How should we manage their intraoperative care?

The goals of this Perioperative Visual Loss (POVL) conference were to 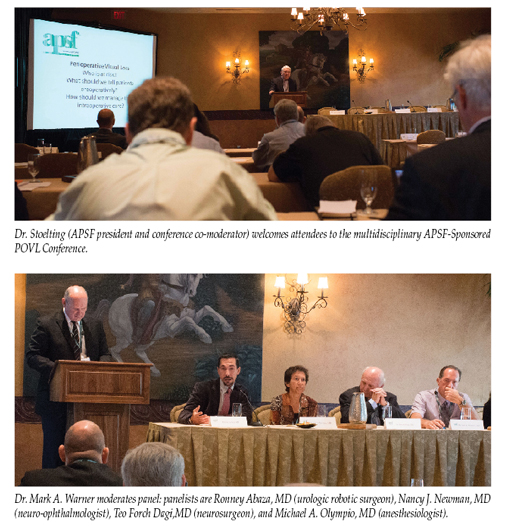 For the initial organizational purposes of the conference, POVL was assumed to be due to ischemic optic neuropathy (ION) or central retinal artery occlusion (CRAO). High-risk patients for ION were defined as those undergoing spine procedures while positioned prone and who had prolonged procedures (exceeding an average of 6.5 hours) and experienced substantial blood loss (an average of 44.7% of the estimated blood volume), or both (Anesthesiology 2012;116:274-282). A similar definition with regard to operative duration was arbitrarily applied by the APSF to head-down (degree of head-down not definable) robotic/laparoscopic surgeries.

An overwhelming theme of the conference presentations, panel discussions, and small group breakout sessions as well as the questionnaire/survey was the importance of including the risk of POVL caused by ION in the informed consent process. For patients considered to be at risk of POVL caused by ION, anesthesia professionals and surgeons should include discussion of the remote risk of visual impairment, ranging from partial vision loss to complete blindness in both eyes, during the informed consent process. POVL from CRAO caused by external globe compression was felt by the attendees to be largely preventable with the use of appropriate positioning aids and monitoring of the external globes (eye checks) during the intraoperative period. Discussion of the rare adverse event of CRAO during the informed consent process should be left to the discretion of the anesthesia professional and surgeon.

Indeed, the value of the informed consent process to the patient is dependent on those responsible for the perioperative care to be cognizant of evolving information and strategies designed to reduce the risk of POVL caused by ION.

It was recognized that POVL is a rare event that, based on its incidence (less that 0.2% of spine surgeries), might not be considered for inclusion in an informed consent by anesthesia professionals and surgeons. However, the rare occurrence of POVL caused by ION is negated by the “extreme value that patients place on vision”) as demonstrated by patients’ willingness (>80% surveyed) to accept risks of stroke or death to save some vestige of vision (Ophthalmology 1996;103:691-696). When patients who had undergone prior spine surgery were asked if they would want to be consented for the risk of POVL with prone spine surgery, more than 80% reported that they would prefer full disclosure of the risk of POVL by the surgeon in a face-to-face discussion prior to the day of surgery (Mayo Clinic Proc 2011;86:865-868).

A total of 67 questionnaire/surveys out of a possible 74 were returned by attendees at the conference who designated their affiliation as “anesthesia professionals.” Their responses to the survey questions are discussed below. The questionnaire/surveys available from the other professional affiliations were considered too few (n-12) to analyze but were recognized to be supportive of the consensus of the anesthesia professionals with respect to the need for inclusion of the risk of POVL during the informed consent process.

Thus, for the purposes of this report, POVL will be considered to be due to ION in the subsequent sections.

When asked if “ION should be discussed during the informed consent process” the majority of participants believed it should be included in the “informed consent form,” either as a single document for surgeons and anesthesia professionals or as a separate consent form from each specialty. The information to be included in the informed consent process can be inferred from responses to specific questions and was supported by the podium presentations, panel discussions, and small group breakout sessions. For example 60 of 67 anesthesia professionals (89.6%) agreed that the “best option available for patients and those responsible for their care is to create and adopt universal best practices management guidelines and recommendations (based on current knowledge and understanding) at their institution and to apply it to the intraoperative management of all patients considered to be at risk for ION.”

Of anesthesia professionals, 85.1% agreed that best practices management guidelines to decrease the risk of ION should be based on steps to decrease the likelihood of venous congestion and edema formation in the periorbital area/head. There was agreement among 63 of 67 anesthesia professionals that male gender, obesity, decreased percent colloid administration of nonblood replacement, and use of the Wilson frame should be added to the risk factors for developing ION following spine surgery. A need to balance colloid and crystalloid administration was supported by 58 of 67 attendees (86.6%). Most anesthesia professionals (97%) agreed that “during spine surgery, the patient’s head should be positioned level with or higher than the heart” in patients considered to be at risk for ION.

Although controlled hypotension has not been identified as an independent risk factor for ION, 57 of 67 anesthesia professionals (85.1%) agreed that “controlled hypotension should not be used routinely in patients considered to be at risk for ION.” There was agreement among 55 of 67 anesthesia professionals (82.1%) that “consideration should be given to the use of staged spine procedures” when the duration of spine surgery is anticipated to be prolonged (preoperatively) or becomes prolonged (intraoperatively).

The need to periodically monitor hemoglobin or hematocrit to detect anemia in patients considered to be at risk for ION was supported by 60 of 67 anesthesia professionals (92.3%), while 86.6% agreed that a specific “transfusion threshold that would reduce the risk of ION related to anemia was not known.” Further, 89.6% of the anesthesia professionals agreed there is no proven treatment for ION when it manifests postoperatively.

In conclusion, the consensus of the attendees at the APSF-sponsored POVL conference may be summarized as follows: