Question Your Understanding of MH:

The anesthesia community has the best understanding of Malignant Hyperthermia [MH] because it is a genetically determined illness that is most often recognized during or immediately after anesthesia with the potent inhalational agents and/or administration of succinylcholine. Moreover, a specific antidote for the MH crisis has been available since the late 1970s, dantrolene sodium. Now dantrolene and other necessary elements needed for emergency treatment of an MH episode are immediately available to anesthesia staff at most hospital and outpatient anesthetizing areas where triggering agents are employed. Death during an MH crisis has undoubtedly decreased since the entity was first identified in the middle of the last century because of anesthesia care givers’ increased awareness and ability to treat the crisis.

Test yourself with the following statements. Are they true or false?

1. MH is better understood now, after more than 40 years of anesthesia education, research, and clinical experience, so it is no longer lethal.

FALSE— There may be an improvement in our understanding of MH susceptibility and the MH crisis since it was first identified as a fatal perioperative event with high fever.1 Indeed, one review of MH in New Zealand reported no deaths from MH crisis from a series of more than 120 crises.2 Unfortunately there are still patients dying of MH every year. MH episodes, individuals with positive MH biopsies, and MH-like events have been reported to the North American MH Registry (NAMHR) since 1988. While data resources in a registry do not provide an accurate event baseline and many events remain unreported, they do provide a profile of events that take place, and there is no evidence to suggest a decrease in MH-related death or complications. The most recent review of MH Registry data shows an increased, rather than decreased, number of deaths reported.3

In addition, there has been skepticism that succinylcholine, alone, causes MH crisis in susceptible individuals.4,5 Older data from the MH registry and newer data from the Canadian MH experience in recent years clearly show that MH crisis can be induced by succinylcholine administration, alone.4,6-8 Succinylcholine induced muscle contracture of patients and swine shown susceptible to MH by halothane caffeine contracture testing have been demonstrated.9,10 While the actual magnitude of the risk associated with succinylcholine, alone, is unknown, it is evident that organizations where succinylcholine may be used with or without triggering inhalational agents should have both the MH antidote, dantrolene, and an approach for management of MH crisis.11

2. Fever is a late finding in MH crisis. If we take measures to keep patients warm, temperature monitoring is unimportant.

3. MH is very rare—there is one causative genetic mutation associated with MH susceptibility.

FALSE—Depending on the population reviewed, MH crisis has been reported with an incidence ranging from 1:8,000 to 1:30,000 anesthetics. Quarterly reviews of calls to the MH Hotline [800-MH-HYPER] made when a caller suspects MH show that around 30% are MH crisis while most represent other acute processes. Early work focused the problems associated with MH crisis on skeletal muscle abnormalities because of the marked increase in muscle tone seen in many MH events.15 In recent years there has been a dramatic growth in understanding the genetics underlying MH susceptibility. Susceptible individuals have demonstrated one or more mutations in the calcium release channel [Ca2+] RYR1 gene16 and in genes for 2 other proteins that interact with RYR1.17,18 Criteria for establishing a causative genetic marker are quite rigorous. In the past linkage to MH susceptibility in one or more families, was demonstrated to loci on chromosomes 1, 3, 5, 7, 17 & 19, but the only genes shown to be associated with MH susceptibility are RYR1 on chromosome 19, CACNA1S on chromosome 1, and STAC3 on chromosome 12. Thus, clinical genetic testing of MH risk has moved beyond the Hot Spots in RYR1 to include ALL of RYR1 and 2 other genes, CACNA1S and STAC3.19,20 Of the >450 MH-associated mutations identified in RYR1, only fewer than 40 have been shown to be functionally causative as reported by the European MH group (www.emhg.org). Interestingly, characterization of the genetics of families with MH susceptibility shows that more individuals in a family carry the genetic marker than have demonstrated MH crisis.21 This suggests that a larger group of individuals is at risk for development of MH than the number reported to have had a crisis, whatever the actual incidence of MH crisis may be. About one in 2,000 people has a genetic trait that could support the development of an MH crisis when their muscle is stressed. MH is neither very rare nor the result of a simple genetic defect. Genetic testing is valuable, as it is very specific, and can help identify many individuals susceptible to MH. However, the gold standard for diagnosing MH susceptibility remains in vitro testing of viable muscle, with the caffeine-halothane contracture test [CHCT], because genetic testing is only 30-50% sensitive at this time.

4. MH crisis is only seen when susceptible individuals are exposed to one of the potent volatile anesthetic agents.

FALSE—MH crisis is most commonly observed during administration of potent inhalational anesthetics after administration of succinylcholine. Halothane, enflurane, isoflurane, desflurane, and sevoflurane have all triggered MH when used alone. MH following exposure to succinylcholine, alone, is more rare but does occur.7,8 Thus, an office or surgery center that does not administer volatile anesthetics but keeps succinylcholine available for emergency use must be prepared to treat MH. Fatal MH has even occurred without exposure to any anesthetic.22 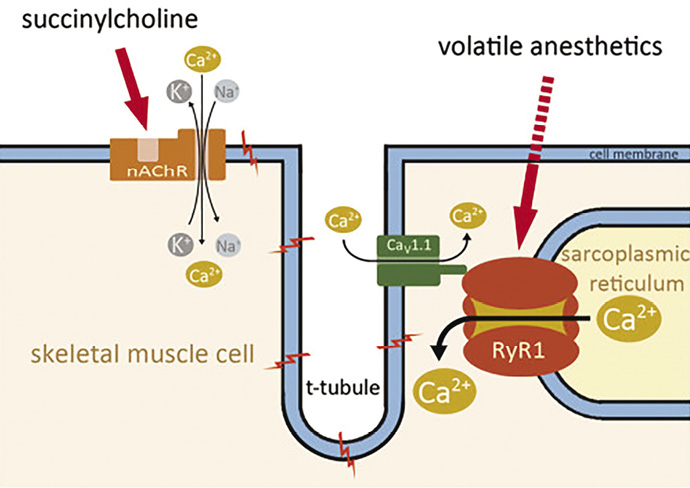 Uncontrolled myoplasmic Ca2+ release is the key to malignant hyperthermia. The most prominent cytosolic Ca2+ elevation results from the freeing of stored sarcoplasmic Ca2+ mediated by ryanodine receptor type 1 (RyR1). While volatile anesthetics stimulate Ca2+ release via RyR1, succinylcholine acts indirectly by activating the nicotinergic acetylcholine receptor (nAChR), a nonspecific cation channel, resulting in continuous local depolarisation. The depolarization can trigger propagated action potentials and will further activate the dihydropyridine receptors (DHPR, CaV1.1) leading to the gating of both Ca2+ release from the SR via RyR1 and L-type Ca2+ current from the extracellular space.

5. MH crisis is an anesthesia-related syndrome and only occurs in the perioperative period.

6. MH crisis isn’t possible if someone has had a number of event free anesthetics.

TRUE & FALSE—Some of the newer anesthesia machines may take an hour or more to “wash out” inhaled agents, even when the vaporizers are off, before the machine would be safe to provide anesthesia for an MH susceptible patient. Also, there are commercially available, cylindrical charcoal filters that can be fitted to both ports of a conventional circle system so that agent concentrations are reduced to less than 5 ppm within a few minutes. While these may need to be changed periodically, they can ensure an agent “free,” safe machine for the MHS patient who needs anesthesia without triggering agents. Keeping an expensive or outdated “clean machine” in reserve is not necessary.

8. Dantrolene comes in large vials and is difficult to draw up.

TRUE & FALSE—Dantrium® (www.dantrium.com) or Revonto® (www.revonto.com) dissolves in 60 ml of sterile water in under 20 seconds. Dantrolene sodium is not in suspension until it is mixed as it is in a lyophilized powder form. However, the additional time of drawing up 60 ml, injecting it into the vial, and then drawing it up again will take about one minute. Depending on how many personnel are tasked with preparing the full dose of 2.5mg/kg of dantrolene sodium for injection for an average adult, about 10 vials, it may take many minutes to prepare the drug for injection. In addition, 600 ml of fluid will be administered with the full dose.

There is a newer formulation, Ryanodex®, recently available from Eagle Pharmaceuticals that allows a small volume diluent [5 ml] to mix a vial of 250 mg for immediate injection. This formulation can be mixed more rapidly than other lyophilized preparations on the market. Five to ten ml of solution of solution from 2 vials of Ryanodex provides a more than ample loading dose of 2-3 mg/kg dantrolene for large adults. Manufacturer’s information can be obtained from http://www.ryanodex.com.