Medication errors are leading causes of preventable harm in hospitals.1 Device misconnections leading to wrong route medication administration have attracted worldwide attention in patient safety.2 These incidents are believed to occur more frequently than reported since visible harm (which drives reporting) does not always result.3 Nevertheless, reports in the medical and lay press4 highlight that wrong route medication errors persist despite mitigation efforts and have catastrophic consequences in a broad range of clinical settings.

The Joint Commission’s Sentinel Event Alert Number 36 (April 2006), cites 9 cases of tubing misconnections involving 7 adults and 2 infants. Deaths occurred in 8 of these instances and 1 resulted in permanent loss of function.3 The Institute for Safe Medication Practices (ISMP) reports numerous misconnection errors between peripheral and central venous infusion routes, neuraxial routes (epidural and spinal), enteral feeds, and bladder irrigation systems.5 Since 1985, 13 cases of inadvertent intrathecal administration of intravenous vincristine have been reported in the United Kingdom (U.K.) resulting in 10 deaths and 3 cases of permanent paralysis.6 Misconnections involving accessory devices such as tubing used for noninvasive blood pressure cuffs, oxygen delivery and sequential compression devices are described as well.7 The US Pharmacopeia, the largest information source of tube misconnection related errors, has received 1600 reports of epidural to central or peripheral intravenous misconnections since 1999.8

In the Labor and Delivery setting, recurring injuries and deaths due to epidural intravenous misconnections have been reported in the United States (U.S.) and United Kingdom (U.K.). In one article, 2 cases of intravenous magnesium sulfate infusions inadvertently administered epidurally within 2 months are reported.9 In another high profile case report, maternal death resulted from the accidental spiking and infusion of an epidural solution (mistaken for an antibiotic) into an intravenous line of a patient that did not have an epidural at the time.10 These traumatic errors have also lead to career ending disciplinary action against providers, loss of reputation for hospitals, and growing public distrust of the health care system.10

The universal presence of Luer connection systems in functionally different types of medical equipment is the leading common root cause of misconnection/wrong route administration incidents. Originally designed for attaching hypodermic needles and syringes, these traditionally inexpensive and easy to use [push (slip) or screw (lock)] male-female configurations enable the direct connection of unrelated medical devices. In other words, “If it can happen, it will happen.”3 A single patient may interface with up to 40 Luer-containing devices during a hospitalization.7 Concern has risen for Labor and Delivery units since medications are concurrently administered to the same patient by physicians (anesthesiologists) and nurses at separate points in care. To date, interventions predominantly aimed at modifying clinicians’ practices (policy changes, re-education, dual signatures, equipment relocation, enhanced labeling) have been implemented in response to misconnection incidents. Patient safety experts regard the effectiveness of these interventions in preventing harm as “weak.”8 Furthermore, these changes potentially undermine efficiency without added safety benefits (prevention of harm) and may contribute to hazardous workarounds. Equipment redesign such as the installation of Luer-incompatible fittings on epidural administration components (syringes, catheter adapters, bacterial filters, infusion tubing, reservoir hubs) has been widely advocated by patient safety experts as a “strong” intervention. In 2002 Lanigan outlined a reconfiguration model for all potential risk points in epidural administration systems, yet emerging technology has been slow to appear.8 Active legislation in the U.K. (effective April 1, 2012) and in the U.S (California, effective January 2014) will prohibit the use of Luer connectors in neuraxial administration systems.11,12

An August 2010 report by the National Patient Safety Agency (U.K.) outlines the current manufacturing activity of Luer alternative components for neuraxial systems. These predominantly relate to spinal devices (needle hubs, syringes, manometers). For epidural systems, several types of epidural needles and loss of resistance syringes with unique safety connectors are in development. In the United States, an epidural safety system, the CorrectInject® System was evaluated at 4 clinical sites and is presently awaiting 501k clearance from the FDA. The following describes the system and the current experience in clinical practice.

For the purpose of the clinical evaluation, 3 packaging configurations were available:

A clinical evaluation by users of the CorrectInject® epidural safety system was initiated at 4 U.S. hospitals. The objectives were to determine the system’s: 1) clinical acceptability and 2) perceived effectiveness for preventing wrong route medication administration into the epidural space. Compatibility of CorrectInject® connectors with other devices (syringe pumps, cassette infusion pumps) was also included in the evaluation. An open-labeled, prospective, controlled study was conducted at 4 clinical sites across the United States from September 2009 until July 2010. The protocol sample size called for 200 device uses for epidural administration. Eligibility for participation included obstetrical, surgical, or pain management patients undergoing epidural administration techniques. Data collection involved the completion of a 9 item questionnaire—“case report form” (CRF) following each use of the CorrectInject® device. Five questions pertained to ease of use and two to error prevention. Included was a rating scale of 1 (very simple) to 5 (very complicated) for ease of use. Space for comments and suggestion was also provided. At the completion of the trial, participating clinicians at each site completed a 16 item system evaluation survey. Ten of these items related to ease of use and 6 to prevention of error. Questions were in “yes/no” format. Responses were entered into an Excel database by the clinical trial coordinator. Monitoring of the study included on-site visitations, and telephone and email contact by the Smiths Medical clinical trial coordinator. Site initiation training included protocol review and instructions for use. Routine monitoring visits were conducted during the trial period and a closeout meeting took place at the completion of the investigation. Inventory of remaining stock kits were collected and returned at that time and final data sheets collected and entered into the database for analysis. 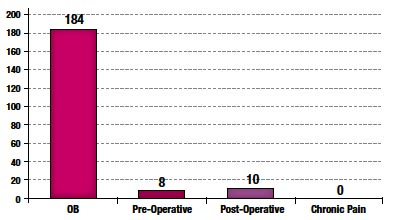 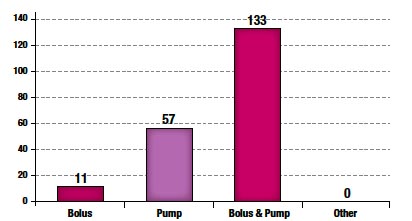 The majority (91%) of epidural administrations were combined bolus and infusion pump techniques as shown in Figure 3.

There were 15 reports of technical difficulties with the CorrectInject® system (Figure 4) with 2 occasions of bypassing the system with the replacement of a standard Luer type connector (Figure 5).

Two such cases involved emergent situations. In one scenario the CorrectInject® connector was noted to be missing upon patient arrival to the operating room. In the other, an urgent epidural bolus was needed with a pre-filled Luer-type syringe with anesthetic medication. In both circumstances, the CorrectInject® epidural connector was replaced with a standard connector. Additional comments referred to the nature of how individual components are packaged and clinician preference for CorrectInject® syringes of different sizes. 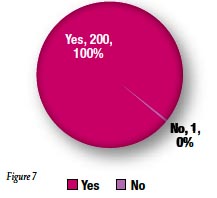 Yellow color coding on the CorrectInject® connector was felt to be an effective identifier for epidural use by 99% of respondents (Figure 7). 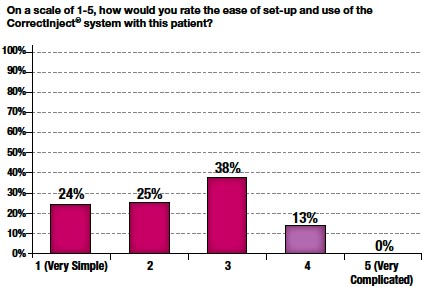 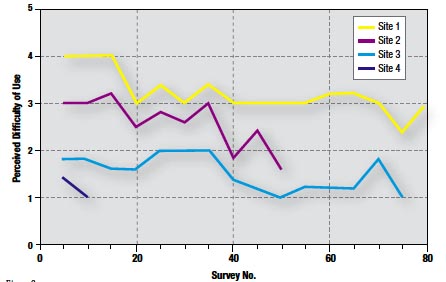 The weighted mean score for ease of use was 2.4. In 86% of cases, a score of 3 or below was given (Figure 8). Furthermore, perceived difficulty with the system significantly declined by up to 50% at each site over time (Figure 9).

System redesign, rather than clinician practice changes, is an efficient and effective intervention against tube misconnections leading to wrong route medication administration.8 The findings of this clinical trial demonstrate the perceived safety benefits and clinical suitability of the device in settings with high utilization of epidural pain management techniques (obstetric and pain management epidural bolus/infusion techniques). Given the favorable “learning curve” illustrating the acceptability of the new system, ease of integration into clinical practice can be anticipated. Specifically, molding of the non-Luer adapter into the infusion tubing during manufacturing would achieve incompatibility with intravenous tubing without required attachment by the clinician. Furthermore, future safety goals could aim for universal storage of epidural solutions in designated, unique containers rather than storage in intravenous bags. This may have prevented the patient fatality involving the accidental spiking of an epidural reservoir, mentioned above. Like the pin index system in anesthetic gas delivery, Luer-incompatibility offers a universal14,15 technological solution that is widely advocated to combat this highly underestimated, “persistent and potentially deadly” root cause of patient harm.