Is it fair to assume that a gas outlet fitting indexed to the oxygen diameter index safety system (DISS) should guarantee that 100% high pressure oxygen is indeed delivered at its output? Is it acceptable that an air-oxygen blender output is indexed to this oxygen standard, yet 21% oxygen can be delivered by this connection?

I’m alarmed that the position statement of other departmental administrators is that we just pay attention to what we hook up (granted). They see no concern about the bigger issue of why the DISS is not protecting us against the delivery of unintended gas. Have the manufacturers of oxygen blenders subverted the system, or is this just a glitch in the standard? Should this go out as a sentinel event? I’d appreciate your input.

Editor’s Note: Responses from several blender distributors acknowledged that these blenders do have male DISS oxygen outlet fittings. Below we reproduce a particularly helpful response from Mr. Tom Green of Paragon Service, a distributor of oxygen blenders. He speaks in reference to his particular SmartBlend blender, but the points are valid for this discussion.

The issue that has arisen is which fittings/connectors should be used on a blender. The factory fittings are oxygen male DISS with check valve. We removed one of the oxygen DISS fittings and installed an oxygen flowmeter. I had a discussion with Bruce Brierley, President of Maxtec (Salt Lake City, UT), who said that an enriched (>21%) mixture is considered oxygen in the respiratory therapy environment.

The opposite could be argued. We could install an air flowmeter, but air is 21%. So that is not completely accurate either. Since there is not a flowmeter for a mixture of 21-100% oxygen, one of the two needs to be chosen. Both are correct, and both are wrong. We have chosen the oxygen flowmeter for the SmartBlend at this time.

I believe the much more important discussion needs to revolve around the SmartBlend itself and the safety features of the SmartBlend. It is the first device that allows anesthesia providers the capability of delivering an auxiliary mixture of 21-100% oxygen of their choosing (e.g., during MAC with a nasal cannula). Currently, most use only the 100% auxiliary oxygen flowmeter attached to the anesthesia machine. One hundred percent oxygen is not required for most patients via a nasal cannula and is very hazardous in case of a fire.

Editor’s Note: The APSF Newsletter and the APSF Committee on Technology wish to solicit input from readers, specifically asking if others have had similar problems, experiences, or concerns. Do you think we need a new standard DISS fitting, and thus new blended flowmeters for oxygen/air mixtures? 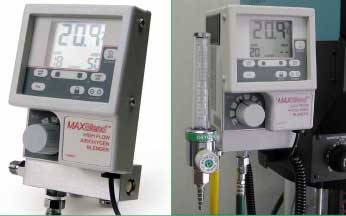 The following information may be useful in the discussion regarding outlet fittings on air/oxygen blenders. You may want to preface the information by indicating it comes from the world’s largest manufacturer and original patent holder of medical gas blenders, Bird Products Corporation, a subsidiary of VIASYS Health care.

Air/oxygen blenders were developed more than 30 years ago for use predominantly in conjunction with mechanical respirators. When developed, the decision to utilize oxygen DISS outlets seemed logical based on the fact that the gas being delivered from the blender would, in most cases, have a higher concentration than 21%. Since there is no DISS standard for a “mixed” gas, it was reasoned that using an air fitting would be more misleading than using the oxygen fitting, and thus a standard was established.

The oxygen DISS outlet fitting is used on all medical gas blenders worldwide, including blenders used for nitrous oxide/oxygen mixing. With an estimated installed base of more than 250,000 gas blenders in the respiratory care market, the use of the oxygen DISS fitting has become accepted as the standard and is used by all known blender manufacturers.

The Smartblend system incorporates the use of the Maxblend low flow blender which has a 0-30 LPM maximum flow range. Since the gas machine O2 inlet requires 50 psi, it would have warnings that would indicate to the user that the O2 supply is not adequate.

Therefore, I would recommend to people interested in blenders for anesthesia that low flow is preferred.

Let me know if I can provide anything else for you.

Editor’s Note: While these letters make several valid and important points, it is important to NOT withhold supplemental oxygen from those patients for whom it is indicated by clinical judgment. The APSF Newsletter invites readers’ thoughts and comments on this topic.