Providing anesthesia to the obstetrical patient is a clinical challenge, due to both maternal physiologic changes as well as neonatal concerns. As the U.S. population has become increasingly obese over the past 30 years, obesity is becoming a common problem in the obstetric population and is associated with a higher complication rate.1 More than 18% of American women have a BMI ≥30 kg/m2.1 The cesarean section rate is nearly three-fold in obese versus non-obese parturients, with a higher incidence of failed epidurals and difficult intubations.1 We recently provided epidural anesthesia for a 640-pound woman undergoing an elective cesarean section. Despite considerable anxiety for the anesthesia team and a patchy block requiring ketamine sedation toward the end of the case, the mother and baby did well. 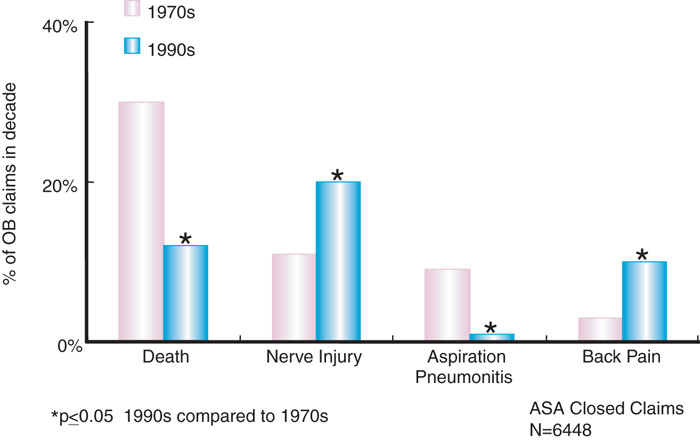 Proper interpretation of closed claims data requires the following caveat. The ASA Closed Claims database does not reflect the incidence of complications because the denominator (total number of anesthetics given) is unknown and the numerator (not all complications result in a claim) is incomplete. However, closed claims data do provide insight into the types and pattern of injuries that result in malpractice claims.

With the increasing use of regional anesthesia and the decreasing use of general anesthesia in obstetrics, it is not surprising that the proportion of claims for maternal death has dropped so dramatically since the 1970s. However, the proportion of claims for death in the non-obstetric group remained double that of the obstetric group in the 1990s. This may reflect the fact that the non-obstetric claims involved patients with more severe systemic disease and greater use of general anesthesia than in obstetric patients.

The introduction of sodium citrate, in the mid to late 1980s, to neutralize the acidity of stomach contents, and the decreased use of general anesthesia in obstetric anesthesia may be responsible for the small but significant drop in aspiration pneumonitis.

The increased use of regional techniques or nerve blocks throughout anesthesia practice may account for the similar increases in proportions of nerve injury claims over the decades in both the obstetric and non-obstetric groups. The anesthesiologist who administers any nerve block (neuroaxial or peripheral) may be implicated in a claim that is obstetric or surgical in origin.

Interestingly, obstetric claims involve a larger proportion of claims for more minor injuries, such as headache, back pain, and emotional distress, than in the non-obstetric population (Table). This may be related to the greater use of regional techniques for obstetric patients, but it may also reflect differing expectations between the 2 patient groups. Obstetric patients generally expect childbirth to be a joyous, natural, rather than medical experience, especially with modern methods of analgesia. One study reported, “It is clear that many of these patients were unhappy with the care provided and believed they had been ignored, mistreated, or assaulted.”2 Other studies have included the concepts that malpractice litigation may serve the purpose not only of reparation of injury and deterrence of substandard care, but also of emotional vindication.”3,4 Alternatively, most non-obstetric patients having surgery expect some discomfort and appear to be more aware of the risks of their procedure. Improved obstetric patient education before labor and delivery and increased physician-patient communication, and interpersonal support after the delivery may reduce claims for minor injuries. 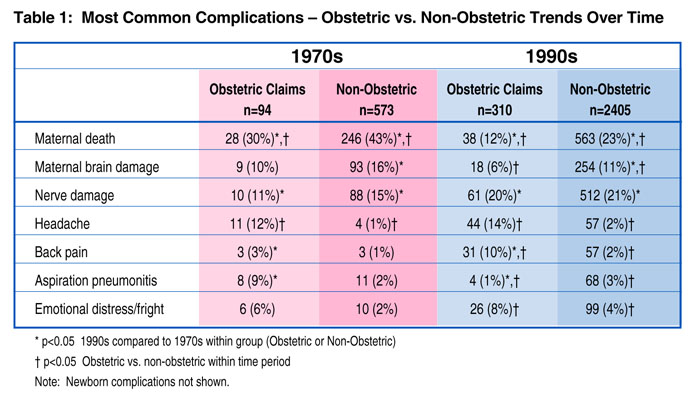 In all areas of anesthesia it is imperative that patients have realistic expectations and a full understanding of the potential major and minor complications associated with their procedure. A visit to the preanesthesia clinic for evaluation and education, together with further discussion between the anesthesiologist and patient on the day of surgery, aids this process. Postoperative visits often pick up the more minor complications, allowing the patient to be counseled and allowing follow-up to be arranged as necessary. Extending this approach to the obstetric patient may reduce anesthesia liability associated with providing anesthesia for labor and delivery. A team approach between obstetricians, anesthesiologists, and nurses, with good interpersonal communication, improves the patient’s confidence and may make a claim less likely for an unexpected outcome.

Ms. Davies is an Assistant Professor of Anesthesiology at the University of Washington in Seattle.