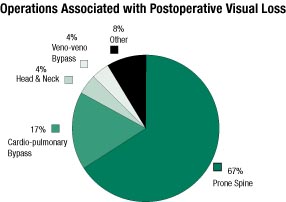 Awakening from spinal or cardiac surgery with partial or complete blindness is a devastating event. The etiology of this catastrophic perioperative complication remains largely unknown, yet its incidence appears to be increasing. The etiology of postoperative blindness is incompletely understood and multifactorial. Due to this concern, the ASA Committee on Professional Liability established the ASA Postoperative Visual Loss (POVL) Registry in July 1999 to collect detailed information on these cases. The goal of the Registry is to identify potential intraoperative risk factors and patient characteristics which may predispose a patient to this perioperative complication. Although data from a registry cannot determine a definite cause and effect relationship, it can be used to find common events or characteristics between patients suffering from the same complication. This information can then be used to guide future research to determine its etiology. 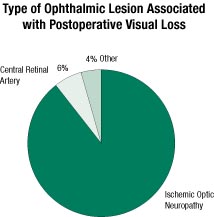 Figure 2. Percentage of cases in the POVL Registry associated with a particular ophthalmic lesion (n=47).

There is a perception that the incidence of POVL has been increasing recently, particularly in association with prone spine procedures. In fact, prone spine procedures account for a larger proportion of POVL cases in this database than previous reviews have demonstrated.1 This may be related to a large increase in the number of complex, long duration, instrumented spine operations occurring over the last decade. Alternatively, this perceived increase, as well as the large proportion of prone spine cases observed in the POVL Registry, may reflect a reporting bias in which people are more motivated to report cases of POVL associated with the prone position than with other types of cases. Because there is no mandatory reporting system for this complication, the true incidence of POVL remains unknown. Estimates have varied from 1 in 100 to 1 in 1000 cases in published series for select procedures such as cardiopulmonary bypass operations.2,3 The overall incidence in all non-ocular operations has been reported as low as 1 in 60,965 anesthetics.4 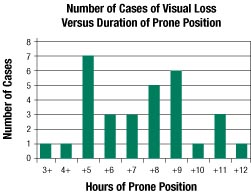 Figure 3. Prone spine cases analyzed separately (n=31): number of cases categorized per duration of prone position. The low number of cases at >10 hours is most likely a result of a low denominator number for these time durations, though the POVL Registry does not contain denominator data.

The POVL Registry also differs from previously published reviews of POVL because of the high percentage (90%, n=42) of cases caused by ischemic optic neuropathy (Figure 2). Only 6% (n=3) of cases were diagnosed as central retinal artery occlusion. Of the remaining cases (n=2), one was caused by retinal ischemia after a bilateral radical neck dissection, and the other was from an unknown cause in a heart transplant patient who did not undergo a funduscopic exam. The high percentage of ischemic optic neuropathy cases may be a consequence of the proportion of cases associated with prone spine surgery. The etiology of POVL in prone spine operations may differ from that occurring with operations performed in the supine position.

Younger age does not appear to be protective. Figure 4 reveals that 21 cases out of 47 occurred in patients younger than 50 years of age. Sixteen of those 21 cases were associated with the prone position. Of those 16 cases associated with the prone position, 14 patients were ASA I or II. Although coexisting diseases may increase the risk of developing this complication, this high frequency of occurrence in younger, healthier patients suggests that intraoperative physiologic variables such as edema formation and venous congestion in the prone position, as well as “normal” physiologic variation in ocular hemodynamics, may be important etiologic determinants. 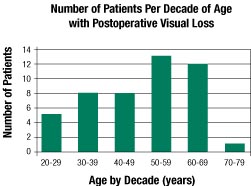 Figure 4. Number of cases categorized according to decade of age. Young age does not appear to be protective for this complication, although the actual incidence per decade of age is unknown since the POVL Registry does not contain denominator data.

The goal of the POVL Registry is to collect detailed information on at least 100 cases so that major common characteristics/events can be identified. All cases of POVL occurring after non-ocular surgery are eligible for submission. The standardized, anonymous case report form can be accessed from the internet at www.asaclosedclaims.org under the POVL Registry subheading. These forms are most easily filled out by anesthesia and ophthalmology personnel, although input from other professions may be helpful. All information is submitted anonymously to ensure patient and health provider confidentiality. Individuals who find the forms too time-consuming to fill out are encouraged to contact the author to make arrangements for case submission.

Dr. Steven Roth, Associate Professor of Anesthesia and Critical Care and Chief of Neuroanesthesia at the University of Chicago, who is a nationally recognized expert in this area, is a consultant on this project.

Dr. Lee is an Assistant Professor of Anesthesiology at the University of Washington in Seattle.