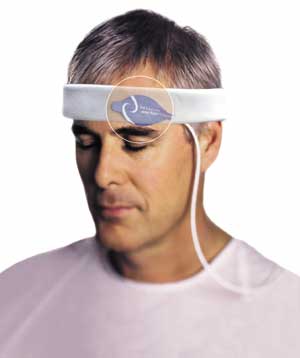 Photo depicting a forehead sensor secured by the headband.

Although the pulse oximetry forehead sensor has been a topic in the literature since 1988,1 its rate of adoption by anesthesiologists has been slow. The reasons for the tepid reception are not altogether clear. Certainly, the forehead sensor is receiving its fair share of scrutiny. For example, the matter of the forehead sensor’s advantages and shortcomings was the subject of a score of papers at the ASA, SCCM, and AARC conferences in 2003, and most recently at the STA conference earlier this year.* In light of the attention the sensor has recently received, perhaps a revisit to the forehead sensor—how it works, what it can and cannot do, and how it should and should not be used—is in order.

Due to simple physiology, anatomical distance, and paths of least resistance, changes in oxygen saturation in patients with poor peripheral perfusion manifest in the head more rapidly than in the extremities. This circulatory delay between the forehead and the periphery has been well-characterized.2 Several years ago, Bebout and colleagues at Nellcor (Pleasanton, CA) found that the “lag time to detect hypoxemia was about 90 seconds greater for finger versus forehead sensors during peripheral vasoconstriction.” More recently, Bebout’s work has expanded to include comparisons of the determinations of hypoxemia on the ear, on the forehead adjacent to the supraorbital artery (MAX-FAST™), and in radial blood proximal to the digital arteries. Research involved placing subjects in a cold room and using thermal images to show differences in vasoconstriction and perfusion at the various sites. Thermal scans and readings over time showed that ear sensors (fed by branches of the external carotid artery) and digit sensors were “most affected by thermo-regulatory vasoconstriction and are slower to respond to changes in central oxygenation.”3

It is well known that patients tend to become mildly hypothermic and vasoconstricted during procedures and postoperatively. As Cortinez observed in his presentation at the 2003 ASA, “The best tissue bed for pulse oximetry is the one that exhibits the least vasoactivity.” Blood to the forehead travels through the supraorbital artery. This area is not rapidly susceptible to vasoconstriction arising from poor perfusion.2,5 In a companion study to the work of MacLeod, Cortinez et al. examined the performance of forehead, earlobe, and digit sensors on patients initially in a normothermic and vasoconstrictive state and then deliberately in a hypothermic and vasodilatory state.6 The forehead was found to be “less vasoactive” in both states, leading the researchers to suggest that the forehead “may be the best place for use in pulse oximetry.” The subjects in the MacLeod and Cortinez studies were healthy volunteers. Given that the patients in the OR are often at the opposite end of the health spectrum, the need for timeliness and reliability may up the ante even more.

In another study, Branson and colleagues compared the digit and forehead sensor in patients who were being mechanically ventilated and who had poor perfusion.7 The study, involving 20 critically ill patients who were at risk for hypotension and hypothermia, included 183 SaO2-SpO2 comparisons. Researchers looked at the root mean square differences (RMSD) between SaO2 and SpO2 in digit and forehead sensors. The RMSD for digit sensors was 2.67%; the RMSD for forehead sensors was 1.45%. Researchers concluded that the forehead sensor “provides a reliable site for SpO2 measurement when peripheral perfusion is reduced by hypothermia and hypotension and the concomitant use of systemic vasopressors.” In addition, the forehead sensor used in the study offered “improved accuracy and a greater likelihood of detecting a pulsatile signal.” In their work with pediatric patients in the OR, Berkenbosch and Tobias also found that the same forehead sensor “was well tolerated and represents a viable option under conditions when extremity-based oximetry is ineffective or unavailable.”8

Interestingly, Branson’s earlier work had not found the same efficacy of the forehead sensor.9 However, that work involved edematous patients with their heads down, and no particular attention was paid to sensor placement location. In addition, a headband to secure the forehead sensor was not used in the earlier study but was in the more recent study. In the discussion section of the 2003 study, researchers comment that the edema and the head down position “confound” the findings of the earlier study. They conclude that “proper sensor placement and use of the headband” are important considerations in the success of the forehead sensor.

These cited studies provide evidence that monitoring with the forehead sensor is a feasible notion. However, proper placement and patient position are two simple but overlooked considerations in most areas of patient care, including pulse oximetry. In this context, proper placement refers to placement of the sensor just above the eyebrow so that it is centered slightly lateral of the iris. Placement also includes use of the headband, as Branson’s work indicates. Patient position for use of the forehead sensor excludes patients in Trendelenberg’s position due to venous pulsations. The product literature carries this admonition, but its importance may have not been given due emphasis in clinical settings. Recently published studies of poor performance with forehead monitoring all tend to overlook the importance of placement site, patient orientation, and headband use.

A third and likely most important consideration is appropriate patient selection. With cost containment an abiding consideration, clinicians must be mindful that, no matter how convenient—site access on the forehead, rather than buried under surgical drapes—the forehead sensor is not for general use. It is intended for patients with poor peripheral circulation. In this group of patients the advantages of the forehead sensor have been well-documented.

Dr. Russell is the Medical Director of the Dare County Emergency Medical System and the Director of Anesthesia at the Outer Banks Hospital in Nags Head, NC.