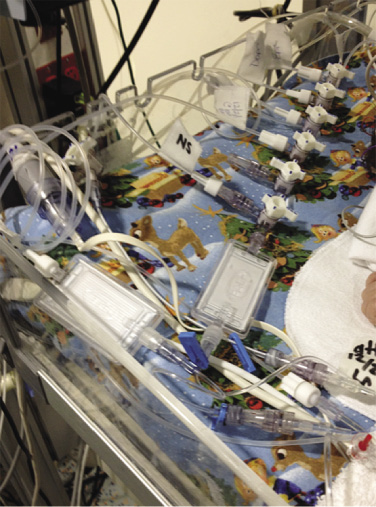 In-line IV filters are commonly used in pediatric patients with congenital heart disease. The main purpose is the prevention of air from reaching the systemic circulation with resulting potential catastrophic effects in this patient population. Other advertised benefits include the filtering of fluid contaminants such as undissolved drug particles; precipitates; bacteria; endotoxins; fragments of glass, plastic, or rubber; and large lipids. Negative aspects of in-line IV filters include reduction of infusion flow rates secondary to filter clogging and added costs.

In-line IV filters are observed to back-siphon when lowered below the patient’s heart level. This effect is usually readily visible as blood can be seen traveling up the tubing toward the filter. However, there is less awareness that once a filter is raised above the patient’s heart level, a bolusing effect occurs. In pediatric cardiac patients receiving vasoactive infusions with an in-line IV filter in place, inadvertent change of the patient’s position relative to the filter level can cause major changes in infusion rates and lead to clinically significant hemodynamic effects. These hemodynamic changes could be attributed to other causes and lead to erroneous patient management actions. 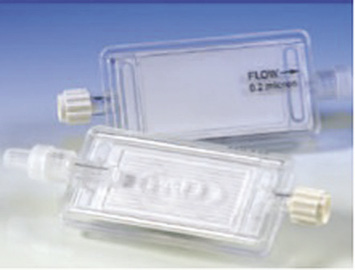 We would like to report the results of an experiment studying these effects. This experiment arose from observation of unexplained episodes of significant hypertension in a neonate after congenital cardiac surgery. The events occurred when the patient was not being touched or stimulated. It was noted that some episodes were in close proximity to repositioning of the IV tubing and infusion apparatus around the neonate. Clinical concern derived from the unexplained hypertensive episodes, which led to EEG monitoring looking for subclinical seizures and other studies to elucidate their causation. Nothing conclusive was found. At this point, we began to investigate the in-line IV filter used on this patient (Posydine ELD96NT from PALL Medical), which has a casing volume of about 2 ml (Figures 1 and 2). 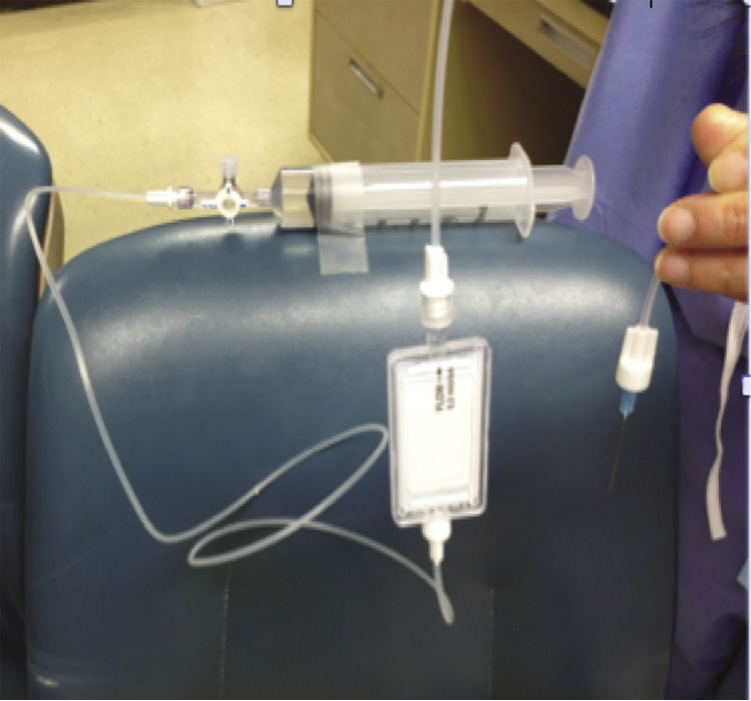 Figure 3. Open system demonstration: Primed filter, end of infusion line with 25-gauge needle and syringe at same level. Note that no fluid is dripping at the open end. 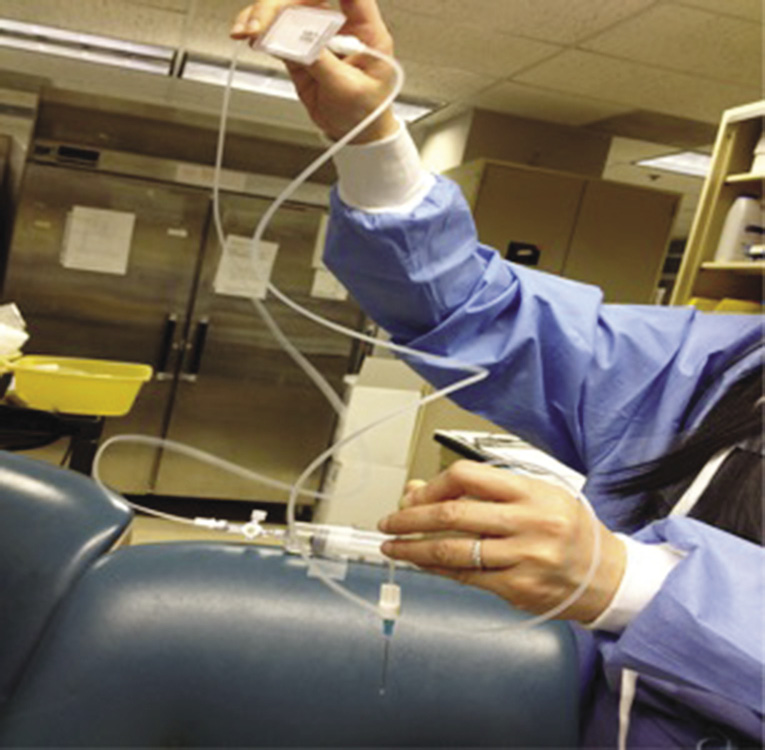 Figure 4. Open system demonstration: Now, the in-line filter is raised above the rest of the system. Fluid briskly drips out at the open end.

The first part of the experiment was an open system consisting of an in-line IV filter (ELD96NT) in an IV delivery apparatus consisting of a 20 ml syringe connected to a stopcock, 2 lengths of 3-ft-low-volume IV tubing with the Pall filter in between. The open end was connected to a 25-gauge needle (Figure 3). Normal saline was used as the infusate for all experiments. The system including the Pall filter was properly primed. The syringe, IV filter, and the open end of the system were initially placed at the same level. No fluid was flowing out at the open end. When the in-line IV filter was raised to an arbitrary level above the rest of the apparatus, fluid started to briskly drip out at the open end (Figure 4). The in-line IV filter housing was observed to lose its prime fluid as evidenced by an air-fluid level on the air-vent side with decreasing prime level (Figure 5). No air was observed on the patient side of the filter. As the in-line IV filter was returned to its original position, the dripping stopped (Figure 6).

To simulate the effect of in-line IV filter height change on fluid delivery rate to a patient, a closed system was created by the use of a Medfusion 3500 infusion pump, a delivery apparatus consisting of a 10 mL syringe and a stopcock connected to 2 lengths of 3-ft- low-volume tubing that is attached to a 16-gauge 16-cm-long single lumen central line. An in-line IV filter was placed between the 2 low-volume tubings. The system including the Pall filter was then properly primed with saline. Simulating the central pressure conditions in a child, the central line was freely suspended into a column of water 11 cm deep, representing about 8 mmHg at the central circulation. The container with the column of water was placed on a high precision scale for weighing the delivered fluid out of the syringe pump. The scale was calibrated prior to use. Care was taken such that the delivery apparatus was freely suspended and not touching the sides of the water column. The syringe pump and the in-line IV filter were secured at the midlevel of the water column to minimize gravity effects of the pump with respect to the level of the central circulation (“patient’s heart level”). To minimize the effects of start-up delay, a 2 ml bolus prime through the syringe pump was performed. The scale was tared, and then the syringe pump was allowed to run at 0.6 ml/hr for over 90 minutes to ensure steady state. The timer was set to zero and started when the weight was 1.9000 grams with the pump and the in-line IV filter leveled with the “patient’s heart.” Then, the in-line IV filter was raised to an arbitrary height above the water column and the rate of change of fluid delivery recorded. The calculated average rate of delivery during this time period was 34 ml/hr, even though the pump was set at 0.6ml/hr. Lastly, once the rate of weight change was slowing down, the in-line IV filter was dropped to its original position. When the filter was lowered to baseline level, back-siphoning into the filter housing occurred at a calculated rate of 24 ml/hr although the filter was NOT below the “patient’s heart” level.

Note that in neonates and infants it is important to minimize the total non-nutritive fluid given; therefore, infusion rates are kept very low, often testing the limits of the infusion pumps for accurate delivery. In sick neonates, infusions can be as low as 0.1- 0.5 ml/hr.
The position of the in-line IV filter relative to the patient can fluctuate throughout the day. IV tubings and infusion delivery systems get rearranged, changed, connected, and disconnected multiple times a day. The patient also gets repositioned and moved to allow for patient care activities.

In our institution, the in-line IV filters are kept on the patient’s bed, so they are unlikely to drop below the patient’s level unless the patient is lifted up. By observation, it was more common to have the filters be raised up above the patient during manipulation of the IV tubing systems. For illustration purposes, epinephrine’s concentration is standardized to 16 mcg/ml for a 5 kg patient at our institution, so that even a small unintended bolus of 0.5 mL means that 8 mcg of epinephrine would be delivered to the patient in a bolus. In a postoperative pediatric cardiac patient with many fresh systemic suture lines, the hemodynamic effect of this unintended drug bolus can have devastating clinical consequences and can lead to unnecessary studies and management changes to account and adjust for the hemodynamic derangements.

Neither the ELD95NT in-line IV filter’s brochure nor its website (www.pall.com) made mention of back-siphoning or bolusing effects. The company was contacted regarding this problem, and the following letter was received as response:

Thank you for contacting Pall Medical with your concern regarding using the ELD96NT filter with your neonatal population. You observed that if the filter becomes raised above the heart of the patient the filter begins to empty, flowing unintentionally and at an unknown flow rate. Your observation is consistent with the design of all air venting filters. During normal operation, the 0.2 micron air venting membrane of the ELD96 filter allows inadvertent air within the fluid to be vented out of the filter. When an air-venting filter is raised above the patient’s infusion site and the delivery of IV fluid is stopped, or flowing at an extremely low flow rate, gravity exerts pressure on the liquid column between the filter and the patient. If the patient’s venous pressure is less than the gravity pulling on this liquid column, the upstream side of the filter housing can begin to fill with air, via the air vents, allowing IV fluid to flow until the main filter membrane becomes air blocked (ie: air therefore will not pass through and enter the patient side of the filter). Once the IV flow is initiated again or the filter is placed back to the level of the infusion site, the filter will automatically refill with solution. Therefore, for normal operation, the filter should be maintained at the level of the infusion site during use. If the IV administration system must be manipulated in a way that requires elevating the filter above the patient, a clamp should be applied on the patient side of the filter until the filter is returned to its original orientation.

For your particular application, Pall Medical has recommended using reorder code NEO96 which is a 0.2 μm filter for use with neonatal patients. The filters hold up volume is 0.4 mL compared to the larger ELD96NT which has a hold up volume of 2.0 mL.

I hope this information is helpful and I appreciate your feedback. To better inform our users, we will update our instructions for use to provide guidance more explicitly.

Our patients now use the NEO96 filters. We also tested the NEO96 filters and found that the back-siphoning and bolusing effects are present but in a much smaller scale. According to Pall Medical the labelling on the ELD96NT is being updated and will be included during in-service training sessions. The additional information will include statements that the filter is intended to be secured at the intravenous catheter and that if downstream extension tubing is used a clamp should be used to prevent unintentional draining. If downstream extension tubing is not used a temporary clamp should be used to prevent such unintentional draining.

In conclusion, we would like to alert health care providers who care for small children and use in-line IV filters about the unwanted flow effects of inadvertent back-siphoning and bolusing. Care should be taken to keep the in-line filters at the patient’s heart level at all times minimizing changes in height between both. If changes are necessary, a clamp should be applied to the patient’s side of the filter realizing that all flow through that line will be stopped till the clamp is released.