Our founding father and first president, Ellison C. Pierce Jr., MD, described his recollections of the history of APSF in the 1995 Rovenstine lecture.1 The first APSF executive director, Dr. E.S. Siker, also wrote a history that can be found on the APSF website. As one who has been involved in patient safety from the earliest days, I can say that those recollections coincide with mine. Yet, they are written from the view of anesthesiologists, who rightly see things from the perspective of personal experience in caring for patients. My perspective is different. It is that of an engineer who had the opportunity to observe and document with an eye that had not been trained to accept the normalcy of the way things were being done. During my orientation to anesthesia, I had the good fortune of spending time in operating rooms with an astute, young anesthesiologist who was able to identify what wasn’t right about the accepted ways of doing things.2 He opened my eyes to see needed improvements in patient safety. It’s from this point of view that I write this account of the APSF, how it came to be, what it has done, and to share some interesting side notes along the way.

Dr. Pierce formed the idea for the APSF in Boston in 1984 at the International Symposium on Preventable Anesthesia Mortality and Morbidity (ISPAMM). The conference was born of a suggestion to Dr. Richard J. Kitz, then chair of the Department of Anesthesia at the Massachusetts General Hospital. Dr. Kitz had given a lecture at the Royal College of Anaesthetists. His topic was human error and preventable mishaps in anesthesia, and was based on information from the critical incident studies conducted by the Anesthesia Bioengineering Unit at the MGH during the mid to late 1970s. Professor Cecil Gray, an esteemed academician, concluded that the information presented demonstrated the need for an international meeting to consider the occurrence of harmful, preventable outcomes. Dr. Kitz carried that idea across the pond and teamed with Dr. Pierce, then president of the ASA, and me, to organize the meeting. Since Dr. Pierce and his department had been involved as subjects in the critical-incident research, and since he had a great amount of personal experience and observations, he was primed to take on the challenge. We gathered 50 invited participants to deliberate on this topic, and received grant support from various companies. As a result, Dr. Pierce conceived of the need for the APSF. He then set about to change his vision into a reality.

The time was right. Dr. Pierce had already formed the ASA’s Committee on Patient Safety and Risk Management. His efforts were supported by a provocative ABC 20/20 report on the dangers of anesthesia. The show featured patients who died or were in a vegetative state as a result of an adverse anesthesia event. Public awareness was so aroused that many patients arriving to the operating room the next day asked if an oxygen analyzer would be used during their anesthetic. In a majority of cases the answer was probably no. That situation was soon remedied.

Dr. Pierce put the political wheels in motion to create a foundation. I recall a meeting in a hotel room at the ASA meeting at which we worked out many of the details of structure, membership, and most important, financing. The ASA agreed to underwrite the startup with $100,000. That was matched with gifts from the Puritan Bennett Foundation, through the efforts of Burton Dole, then CEO of Puritan Bennett, and from Ohmeda, through the efforts of its CEO, the late Dekle Rountree. I recall a brief discussion about the name and simply saying, why not just call it what it is, the Anesthesia Patient Safety Foundation? It seemed so natural that it stuck without much discussion. I think one of our most important early decisions was the adoption of a simple mission statement: “To ensure that no patient is harmed by the effects of anesthesia.” We altered that just a bit a few years later (dropped “the effects”) and more recently expanded the concept to more of a vision with more specific targets as our mission. However, the basic, simple idea still stands and drives all that we do.

A 40-person board was assembled that included a truly interdisciplinary group of patient safety advocates reflecting one of Dr. Pierce’s most important visions: that to be effective and successful, the APSF must be broadly based, allowing cross-fertilization, and engaging manufacturers in the process of developing patient safety solutions. In an effort to reach all anesthesia providers, existing political differences were put aside and 3 CRNAs were appointed to the board.

I am proud to have been counted among the members of the first Executive Committee, although those who know me may be hard pressed to recognize the guy with the hair and beard in the original photo from the APSF Newsletter, Volume 1, No. 1.

The initial strategy of the APSF continues very much to this day, originally driven by the knowledge that we must be lean and highly leveraged. We quickly agreed that a newsletter would be the main communication vehicle and that it must be delivered to all anesthesia providers without allowing cost to become an obstacle. That was the only way to be sure the message would get to everyone who needed the hear it. We were fortunate to have John Eichhorn ready to take on the role of editor. His college editorial experience came in very handy. The first 10 years of Newsletters have been compiled into a single volume.3 The excellence continues to this day in the able hands of Dr. Robert Morell.

Everyone agreed that research must be a core element of the APSF activities. We wisely recruited Dr. Arthur Keats to guide the formation of a scientific evaluation committee and review process. His years of research experience were invaluable. At the time he was not a strong advocate of the need for a patient safety movement and was actually skeptical that credible research could be done. That was exactly the reason we needed him, to be sure we didn’t fool ourselves. Having set up a robust process, Dr. Keats passed on the committee leadership to me. I was gratified to receive a letter saying how he was both surprised and pleased that the committee had worked out so well. It is working well to this day, now under the highly competent leadership of Dr. Sorin Brull.

During those first years, there were a few key projects and actions that the APSF undertook to make patient safety visible. I think the most important was the strong support for pulse oximetry and, later, for capnometry. These technologies have obviously become standards of care and continue to play a tremendous role toward insuring patient safety.

Other important APSF initiatives and a review of research accomplishments are described in other articles in this special issue. Many of the most important initiatives in those early years were those led or instigated by Dr. J.S. (Nik) Gravenstein, a key innovator, intellect, and driving force on our Executive Committee from the beginning and for many years. He arranged symposia (including one on cost containment and patient safety in anesthesia), developed useful relationships with our industry colleagues, and generated much academic material and many ideas for the
Newsletter. 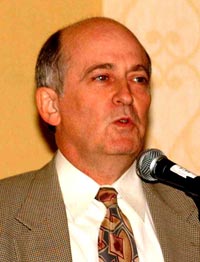 Given my special interest in simulation, I will make the case that it was one of the most important developments to arise from our research support, as evidenced from the now widely disseminated programs in simulation in anesthesia and every other health care domain. Anesthesiology can be proud of its leadership as a specialty and the many leaders, innovators, and researchers it has produced in this relatively new field.

We did some things in our early years that either didn’t work out at all or didn’t achieve the kind of leverage for which we had hoped. I especially recall the Grand Anesthesia Symposium that we planned. We had great hopes for a great conference to which we would attract many anesthesia providers and stakeholders to learn the various aspects of anesthesia patient safety. It was a flop. Almost no one signed up. There was not enough interest at the time or perhaps we just didn’t know how to market such things. Over the years we learned how to wisely plan such events, to wit, symposia and workshops on patient safety and cost reduction, simulation, and more recently, long-term outcomes. In addition, the annual workshops of the Board of Directors have grown to be highly interactive, stimulating meetings on timely topics, e.g., high reliability organizations (2004), the patient experience of adverse events (2005), and the dangers of patient controlled analgesia (2006).

As the APSF took hold, we began to outstrip our ability to get things done with a 100% volunteer organization. Dr. Pierce was doing things out of the base of his private practice anesthesia group and was clearly stretched. It was a great fortune that Dr. E.S. (Rick) Siker was stepping down as chair of his department. Recognized as one of ASA’s most effective presidents, Rick was a perfect match for what APSF needed. He graciously took on the new role of executive director and formed an effective administrative office, with compensation of a small fraction relative to the value of the dedicated effort he gave. Later, as Dr. Pierce and Dr. Siker were preparing for retirement we struck gold again, and Dr. Robert Stoelting took on the job of part-time president. Dr. Pierce stepped into the executive director role for a few years to make an effective transition. When Dr. Pierce fully retired in 2003, we reorganized to reflect our new needs, and Dr. Stoelting became the full-time president and 2 executive vice presidents positions were established to expand our capabilities, initiatives, and infrastructure. Mr. George Schapiro and I currently occupy those positions.

The Executive Committee has turned over almost completely since 1986. What is so remarkable is that without exception, each new member has brought new vitality and ideas while maintaining the collegiality that permits lively debate and disagreement over issues of importance to serving the Foundation’s mission. After 20 years, I believe that the APSF is even more vibrant than it has ever been and that those who support it in the anesthesia professions are even more committed to its mission: To ensure that no patient is harmed by anesthesia. Of that, you can all be very proud.

Dr. Jeff Cooper is executive vice president of the APSF and one of the founding members of that organization and Associate Professor of Anesthesia, Harvard Medical School, Boston, MA.