Anesthesia personnel have come to rely heavily upon end-tidal carbon dioxide concentration to confirm correct endotracheal tube placement and adequate ventilation. We report a case of sudden loss of end-tidal carbon dioxide during a prone-positioned case due to a substantial leak in the breathing circuit caused by failure of the sidestream capnography measurement system. This failure was a result of a crack in the water trap for the gas analyzer on a Dräger Apollo anesthesia machine that occurred from accidental spillage of isoflurane. 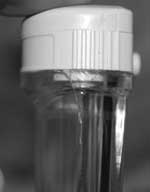 A healthy, 75-year-old woman for a left L5-S1 minimally invasive discectomy was induced with propofol, intubated, and maintained using a mixture of oxygen, nitrous oxide, isoflurane, and remifentanil. The patient was positioned onto an Andrew’s frame and equal breath sounds confirmed. Approximately 1 hour after the start of the procedure, the isoflurane fill level on the viewing glass was noted to be nearing empty, and the vaporizer was refilled. Due to difficulty with the key-fill block mechanism on the Dräger Vapor 2000 vaporizer (Telford, PA, USA), some anesthetic agent inadvertently leaked out of the canister during the refilling process. Less than a minute later, a sudden loss of end-tidal carbon dioxide was noted. The patient was switched from a volume-control mode to manual ventilation as troubleshooting began, including examining the patient’s endotracheal tube and breathing circuit and listening for breath sounds to evaluate for tube dislodgement. The nitrous oxide was discontinued, and oxygen flow was turned to 10 L/min. A substantial leak was apparent on manual ventilation, and the capnogram tracing was absent, despite connection of the sampling tubing. The patient was switched from the anesthesia circuit to a self-inflating bag valve system. Despite apparent loss of end-tidal carbon dioxide, blood pressure and heart rate remained stable, and the pulse oximeter read 100% with a nominal plethysmogram. Anesthesia was maintained by increasing the remifentanil drip and intermittent boluses of propofol. Although no evidence of a change in the endotracheal tube was apparent clinically, a stretcher was brought in the room and the surgery team was made aware of the possible need to turn the patient to the supine position for repeat laryngoscopy to confirm tube placement. We attempted to change out the sample line of the capnograph and were in search of an auxiliary capnograph when we discovered a large crack on the posterior side of the Apollo capnography water trap (Figure 1). We switched the patient back to a volume-controlled mode of ventilation with high flows to overcome the substantial leak until a new water trap could be found, and the case proceeded uneventfully. The patient emerged from anesthesia with no apparent ill effects. We considered this incident to be a unique and chance occurrence until a similar experience happened to another anesthesia provider. The journal Anesthesiology declined publication of this report but subsequently published another report of this same problem.1 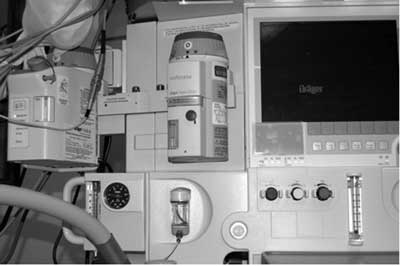 We are concerned about the placement of the water trap beneath the anesthetic vaporizers (see Figure 2.) Avidan et al.2 demonstrated the deleterious effects of spillage of enflurane and isoflurane on polycarbonates present in the venous outlet of membrane oxygenators from cardiopulmonary bypass machines. In their laboratory tests, a few drops of enflurane and isoflurane that trickled onto the base of the venous reservoirs led to cracks within seconds of contact. Our case, and now others, clearly demonstrates that spillage can irreparably damage the water trap and aspiration capnography system on the Dräger Apollo machine with potentially dangerous consequences. Personal correspondence with a Dräger representative indicates that the water trap is made of polymethyl methacrylate, also known as Plexiglas. We are unaware of any literature describing the specific effects of etheric volatile anesthetics on polymethyl methacrylate, but we suspect that volatile agents may lead to cracking of many different thermoplastics. The cracks in the water trap may not be readily visible, and the substantial leak in the breathing circuit could inhibit positive-pressure ventilation and delivery of anesthetic vapors and oxygen while awaiting a new trap. We further wonder whether or not the water trap plastic might gradually decay with routine exposure to sampling volatile anesthetics. We believe that anesthesia personnel should become more aware of the potential interaction between volatile anesthetic agents and thermoplastics associated with the anesthetic machine and ask Dear SIRS to assist in dialog with the manufacturer, requesting a response. Pursuant to the
Winter 2007/2008 APSF Newsletter Dear SIRS recommendations for reporting such incidents, we have submitted this report to ECRI. Perhaps the following should be considered

Finally, we appreciate the response and cooperation of the manufacturer in reducing the likelihood of this problem affecting the safety of any other patients.

Dräger welcomes the opportunity to respond to this letter. Dräger became aware of this potential failure mode after the release of the Apollo anesthesia machine in 2006. This failure mode requires that liquid anesthetic agent fall onto the water trap, and is not considered normal operation of the machine or vaporizer. In order to minimize the risk of this reoccurring, internal documentation was developed and released to the sales and clinical applications teams for installation training to advise the customers not to place the isoflurane vaporizer above the water trap.

The author reports a substantial leak as a result of the water trap cracking. Dräger has not been able to reproduce this finding, and suspects that this may not have been related to the cracking of the water trap. The water trap is connected to the breathing system by the sample line. A standard sample line has an internal diameter of 1-2 mm, and a length of 4-6 feet. The maximum flow of gas at normal ventilation pressures is no more than 200-300 mL/min.
In addition to the revised training documentation, Dräger has subsequently replaced the key filling system on the vaporizers, with the new DrägerFill system which has significantly reduced the risk of spillage of anesthetic agent during the filling process. For customers that are concerned about the potential for leakage of liquid isoflurane during vaporizer filling, Dräger has developed a field upgrade kit for existing Vapor 2000 vaporizers to the new DrägerFill design. Please contact your Dräger representative for more details.

The vaporizers at Wake Forest University School of Medicine have been upgraded to the new
DrägerFill design.

The information in this column is provided for safety-related educational purposes only, and does not constitute medical or legal advice. Individual or group responses are only commentary, provided for purposes of education or discussion, and are neither statements of advice nor the opinions of APSF. It is not the intention of APSF to provide specific medical or legal advice or to endorse any specific views or recommendations in response to the inquiries posted. In no event shall APSF be responsible or liable, directly or indirectly, for any damage or loss caused or alleged to be caused by or in connection with the reliance on any such information.