Medication errors from look-alike ampoules continue to cause serious patient harm resulting from lack of systematic medication safety practices. We report a case of a fatal medication error for an emergency cesarean section for term twin delivery.

Case Description: A 21-year-old woman with a 37-wk twin pregnancy came to the hospital emergency department due to painless vaginal bleeding, which started 6 hours prior to arrival. The patient’s initial vital signs were: BP=100/70, T=37, HR=94/min, RR=18/min. Fetal heart rates were 140/min and 116/min. Emergency ultrasound revealed decreased amniotic fluid in Twin A and an incomplete placenta previa. The patient’s serum hemoglobin was 10 mg/dl. The patient was scheduled for a cesarean section due to vaginal bleeding and placenta previa.

The anesthesiologist decided to administer spinal anesthesia and asked his technician to give him 1.5% bupivacaine. The technician took out an ampoule from a box, opened it, and gave it to the anesthesiologist. The anesthesiologist injected the drug after confirming free flow of cerebrospinal fluid. After injection, the patient was placed in the supine position for prepping and draping. Approximately 3 minutes after injection of the drug the patient began tossing and turning, and complained of severe sharp pain from her waist to her lower extremities. The patient became dysphoric and complained of dizziness. Her vital signs at that time were: RR=18/min, PR=100/min, BP=110/70. There was no demonstrable sensory or motor block in her lower extremities. Consequently, general anesthesia was emergently induced for ongoing vaginal bleeding and fetal distress. Both twins were delivered uneventfully with Apgars of 5 and 6 for Twin A and 8 and 9 for Twin B.

At the conclusion of surgery, the patient developed a tachyarrhythmia at an approximate rate of 280, which was treated with 100mg of lidocaine, as the anesthesiologist discontinued the volatile anesthetic. Approximately 30 minutes after the attempted spinal anesthetic, the patient was noted to have severe jerking motions in her extremities and nystagmus consistent with a seizure. Pupils were alternately dilating and constricting. She received sedative drugs and was mechanically ventilated. Emergency serum electrolytes were within normal limits. She subsequently developed ventricular tachycardia, which was initially responsive to cardioversion. Ventricular tachycardia recurred, and was no longer responsive to cardioversion. Her rhythm progressed to ventricular fibrillation, which was refractory to treatment, and then asystole. CPR was performed for 1 hour without success. 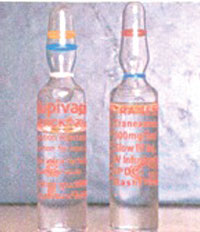 After consultation with a neurologist, the spinal anesthetic was suspected of causing the fatal reaction. After recovering and reexamining the used drug containers, we found an empty tranexamic acid ampoule instead of a bupivacaine ampoule. Tranexamic acid is not a routine drug in our operating room, but it had been used to control a nonobstetric patient’s bleeding some weeks ago. Residual unused ampoules previously were put in the drug chest instead of sending them back to pharmacy. When the bupivacaine ampoule was compared to the tranexamic acid ampoule, we found that they both had the same volume / size, color, shape, and font on the label (see Figure 1).

Tranexamic acid is a drug used to inhibit fibrinolysis. It is a drug not typically stocked in the obstetric or other operating room because of its rare usage. Despite this seemingly rare juxtaposition of events in this case report, there are 4 other publications of accidental intrathecal injection of tranexamic acid with resultant seizures.1-4 Of these 4 reports, 3 patients who had been given a smaller volume of tranexamic acid via intrathecal injection survived with minimal or no permanent sequelae. The 4th patient, who had been given a tranexamic acid dose similar to that in our case report, developed seizures, ventricular fibrillation, and died.

Drug errors may be minimized by the following procedures: 1) a standardized arrangement of drugs in the operating room; 2) reading the drug label prior to drawing up the drug; 3) drug companies creating different (size, color, shape) drug labels and vials; and 4) continuous review of medication errors in hospitals to identify causative associated factors and develop systematic interventions for prevention.

Firouzeh Veisi, MD is an assistant professor of Gynecology at Kermanshah University of Medical Sciences. Babak Salimi, MD is an anesthesiologist.

Gholamreza Mohseni, MD is an assistant professor of anesthesiology at Kermanshah University of Medical Sciences.

Parisa Golfam, MD is an assistant professor at Kermanshah University of Medical Sciences.

Azam Kolyaei, BS is an anesthetist at Kermanshah University of Medical Sciences.