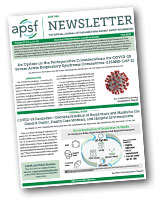 Letter to the editor regarding pre-filled syringes, which can look similar, particularly when the label side is facedown. We suggest utilizing different colored caps in order to quickly identify the appropriate medication.

Disclaimer: Viewers of this material should review the information contained within it with appropriate medical and legal counsel and make their own determinations as to relevance to their particular practice setting and compliance with state and federal laws and regulations. The APSF has used its best efforts to provide accurate information. However, this material is provided only for informational purposes and does not constitute medical or legal advice. This response also should not be construed as representing APSF endorsement or policy (unless otherwise stated), making clinical recommendations, or substituting for the judgment of a physician and consultation with independent legal counsel. 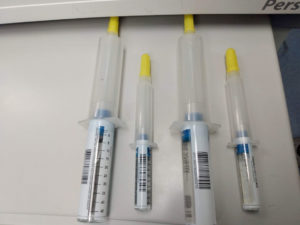 We read with great interest the publication of the letter “Medication Error Related to Look-Alike Prefilled Syringes”, a letter which was a response to the letter previously published entitled “’No Read’ Errors Related to Prefilled Syringes”.1,2 Our institute experienced a similar incident with syringes which could easily result in a safety concern. Prefilled syringes are known to be convenient, sterile, and uniform in production. We had an event during which, in anticipation for reperfusion during a liver transplant, we had multiple prefilled syringes ready. These included 50% dextrose, epinephrine, sodium bicarbonate, and calcium chloride. We had planned to administer the sodium bicarbonate and the calcium chloride, but the similarly sized dextrose and epinephrine syringes were grabbed instead. Fortunately, this error was caught prior to their administration. However, this near miss highlights the inherent safety concerns involved with these prefilled syringes. 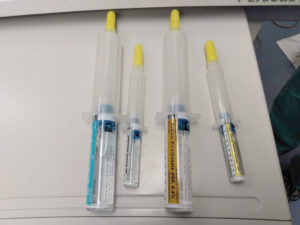 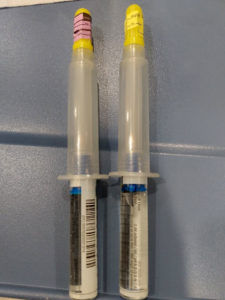 Reperfusion is a critical moment during liver transplantation. Often hemodynamics can swing wildly and a severe drop in mean arterial pressure is expected and needs prompt treatment. It has been noted in the letter by Parr et al., that prefilled syringes can look very similar. We noted this as well, particularly when the label side is facing down due to the lack of circumferential labeling (see figures 1 and 2). Parr made multiple excellent suggestions to increase safety when using prefilled syringes including not assembling these syringes beforehand, having them put away from the anesthesia cart, and not having beginner trainees administer them. However, these suggestions were not applicable in our high acuity clinical situation, where being able to respond quickly was essential. We suggest the utilization of American Society for Testing and Materials (ASTM) color coded caps rather than the generic yellow caps. These would be quickly and easily identifiable even if the label is turned downwards as anesthesia professionals are already familiar with the color coordination. This can be accomplished with either a manufacturing change to produce different colored caps or, on a simpler institutional level, by placing appropriate ASTM colored stickers on the cap or circumferentially around the syringe itself (see figure 3). We believe that adjustment in the coloring of the caps and/or sticker labeling circumferentially around the syringe would help to reduce the risk of medication error during critical moments of patient care. Use of the ASTM colored stickers does still retain the possibility of confusing different medications that fall within the same color classification (such as epinephrine and norepinephrine both having purple colored caps). Therefore, it is clear that nothing takes the place of the anesthesia professionals drawing up the correct medication into the correct syringe, and verifying the correct labeled name, dose, and syringe prior to administration of the medication to the patient.

Cynthia Wong is an anesthesiology resident at Westchester Medical Center/New York Medical College. She has no conflicts of interest.

Angelique Nicolai is an assistant professor of anesthesiology at Westchester Medical Center/New York Medical College. She has no conflicts of interest.

Andrew Iskander is an associate professor of anesthesiology at Westchester Medical Center/New York Medical College. He has no conflicts of interest.

None of the authors have any conflicts of interest to declare.